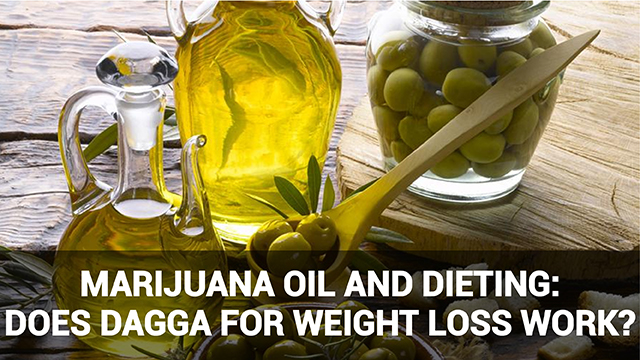 Marijuana, also known as ‘cannabis’, ‘weed’ and ‘dagga’, has become an increasingly popular natural remedy.  Marijuana oil is widely used both externally and as an ingested health supplement. Marijuana oil for weight loss is one such use, though the benefits of cannabis or weight loss are still a contentious topic. What are the benefits of using weed for losing weight? Read on to find out:

Many people are familiar with cannabis as both a recreational drug and medicinal herb with useful medical properties. One of the reasons more people are turning to cannabis is that weed oil has fewer toxic side effects than alternatives. Where weight loss is concerned, many dieting pills contains addictive substances, including substances resembling the street drug Speed. Weed oil, by contrast, assists weight loss by:

Although marijuana or weed is commonly associated with the side effect known as ‘the munchies’, where weed users crave snack foods, the herb is also known to have an appetite-suppressing effect. Marijuana oil for weight loss is effective because of the active compound ‘cannabidiol’. This is the part of the herb that promotes ‘happy hormones’ and is thought to affect the gut and speed up some users’ metabolisms.

Stress and weight gain go hand to hand. Many of us develop unhealthy relationships with food to cope with stress, and this can lead your weight to balloon. Cannabidiol (CBD for short) affects cortisol production in the brain, inhibiting the brain processes associated with stress. That’s why smoking weed or taking marijuana oil often produces a relaxing effect. If you tend to eat to relieve stress, even when not hungry, marijuana oil can provide a useful substitute.

Research suggests that CBD oil enhances the mechanisms that break down the fat in your body (your metabolism). Researchers found in studies that marijuana oil for weight loss was particularly effective on subjects already on a calorie-controlled diet. Thus although marijuana may be effective for promoting weight loss, it’s best used as part of a holistic approach to wellbeing.

Even if this sounds far-fetched, marijuana oil helps manage your blood sugar levels. Although research into this property is still in early stages, recent studies have found that a chemical called THCV helps increase insulin sensitivity and decrease insulin resistance. Marijuana oil for weight loss is thus also promising for diabetics.

Many also take marijuana oil not for weight loss but appetite stimulation. Cancer patients, for example, have been given cannabis oil to encourage eating at meal times. Even if you are healthy, scheduled doses of marijuana oil may also help you to stick to regular eating times. What’s more, the satisfaction-increasing psychological effects of medical marijuana mean that you will eat less for emotional reasons and more to attain adequate nutrition

Taking marijuana oil for weight loss may not be its most common use. Yet compared to alternatives such as risky fad diets that give imbalanced nutrition or dieting pills, it does provide a natural means to stimulate weight loss and balanced appetite.