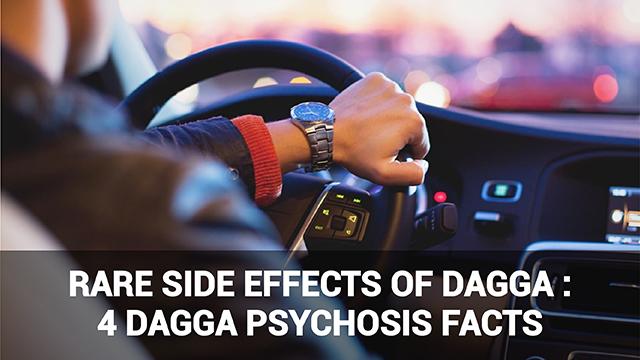 Dagga or marijuana has become a popular medicinal option for treating various ailments and conditions. At the same time, the side effects of dagga mean that there is still some controversy surrounding its safety and legalization. One of the most common concerns regarding dagga is dagga psychosis (where the user may experience paranoia or lose a sense of reality). Here are 4 key facts about this uncommon side effect of marijuana:

1. Psychosis from dagga is linked to acute consumption

Although studies have found that taking medical or recreational marijuana may lead to psychosis, Psychiatric Times mention ‘acute consumption’ specifically. This means that frequent users who consume dagga at high doses are more likely to develop dagga psychosis. Many medical users who micro-dose would thus have lower risk.

2. Despite psychosis risks, dagga has an extensive history of medicinal use

Cannabis has been used for hundreds of years to treat many health conditions. However, recreational use of cannabis has put the rarer side effects of dagga in the spotlight, including psychosis. Understanding the side effects of marijuana for recreational use is complicated by the fact that street (illegal) weed is sometimes mixed with other substances to produce a more narcotic effect, and these may at times be the underlying cause of psychosis.

3. Dagga psychosis has less genetic basis than other types

Some types of psychosis (such as that associated with schizophrenia) are more prevalent in people who have family histories of similar mental illness. In the case of dagga psychosis as a side effect, there is not as clear a link to genetic predisposition, according to Psychiatric Times. In their words: ‘Primary psychosis has a strong association with schizophrenia and other psychotic disorders in first- or second-degree relatives, whereas CIP has a weaker family association with psychosis.’

4. Psychosis as a marijuana side effect is linked to THC

Psychotic disorders induced in people taking marijuana are mainly because the chemical compound THC that is responsible for the ‘high’ effect of dagga. THC (short for ‘tetrahydrocannabinol’) has been found to worsen psychotic symptoms in people already experiencing them, which is why marijuana use, whether for recreational or medicinal use, is not recommended for individuals with mood disorders.

A study conducted at King’s College in London found changes in brain activity in the areas thought to be linked to psychosis after test subjects consumed THC-containing pills.

A further complication in linking dagga consumption to psychosis is that another compound found in marijuana may decrease marijuana-related psychosis. In the same study mentioned above, cannabidiol was administered to the same test subjects, along with a placebo. Between the groups who received the placebo and the cannabidiol pills, there was no difference in psychotic symptoms. The test saw lower activity in the brain region called the ‘striatum’. Cannabidiol (CBD) is thought to block the binding of THC with nerve cells.

Studies in the link between dagga and psychosis thus at times contradict each other, and there is no certain, reproducible psychotic effect.

Whether or not marijuana serves as a trigger depends on the individual’s frequency and intensity of use, whether there is existing psychosis, and other factors. Thus those who use legal weed for medicinal purposes may have lower risk profiles, due to the controls in place and moderate doses used.