Side effects of dagga on sexual performance 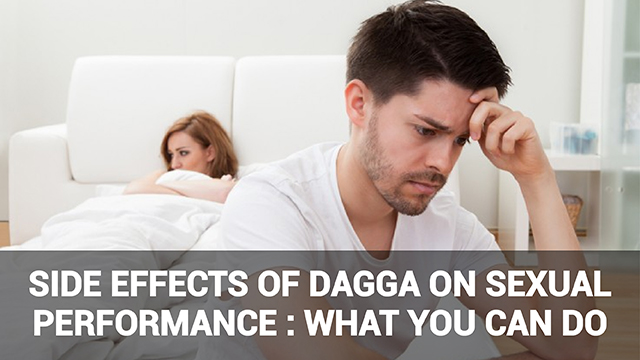 Many people struggle to attain the mood necessary for physical intimacy. Some choose to use alcohol to facilitate ease yet getting drunk is seldom an ideal state for a safe and mutually satisfying sexual interaction. Due to its effects as a relaxant and its mood-elevating properties, dagga is widely used as a sex aid. Yet what are the unwanted side effects of dagga on sexual performance, and what can you do about them?

Side effects of dagga on sexual performance: What studies say

Research into the side effects of dagga on sexual performance generally relies on anecdotal evidence derived from surveys and interviews. Thus there have not been sufficient studies that have examined the precise effects of cannabis on sex.

Despite this limitation, studies have found interesting anecdotal evidence. According to research published in the Archives of Sexual Behavior, many who used marijuana prior to sex vs alcohol experienced fewer negative effects such as erectile dysfunction or vaginal dryness.

Despite this comparative difference between marijuana and alcohol’s effects on sex, there were negative side effects reported. These included:

Additionally, some studies have found that men report difficulty getting aroused or attaining orgasm under the effects of marijuana.

Given these side effects, what can you do if you use marijuana for medical or recreational purposes?

The psychological side effects of marijuana that some reported (paranoia and anxiety) are often the result of underlying emotions such as fear or anxiety being amplified. Because marijuana amplifies mood, it’s important to be in a good frame of mind before combining cannabis and sexual intimacy.

As with other substances that have mood-altering effects, it’s safest to use dagga without any adverse effect on sexual performance when you use it in moderation. Getting so high that you feel lethargic or apathetic, even, is not conducive to the focus and presence sexual intimacy demands.

Cannabis has both negative and positive effects on sex drive and function. The impact on sexual performance dagga has may be largely be due to psychological effects, such as whether the active ingredient of cannabis (THC) increases or decreases stress and anxiety.

To ensure a better time when mixing marijuana and sex, its important to have open communication with your sex partner. If you are struggling to stay aroused, for example, you may simply need to agree to try later or another time when you are both in the right mood for great sex.

Whatever the effects of marijuana on your sexual intimacy and your ability to function, establishing open communication with anyone you have sex with is a vital step to better sex. This ensures both parties feel safe enough to be honest and deal maturely with any unexpected or frustrating side effects.