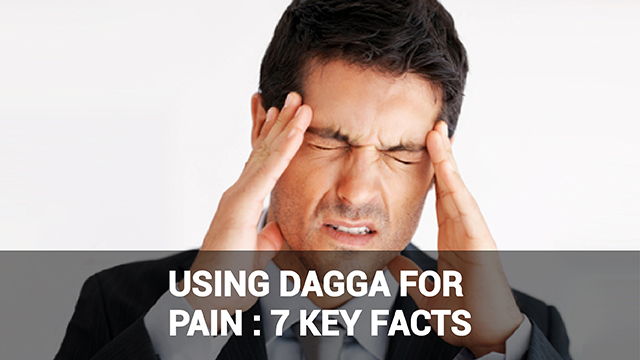 Dagga, also known as cannabis, marijuana, and weed, has many beneficial health properties. Doctors are prescribing the plant more and more to alleviate pain associated with difficult diseases such as cancer, Alzheimer’s disease, schizophrenia, arthritis and more. Although many use dagga simply to get high, recreationally, dagga for pain relief is a practical solution to one of the most common ailments. Here are 7 key facts about using marijuana to ease pain:

1. Dagga for pain relief is being legalized increasingly

More and more countries are opting to legalise marijuana as a valid source of medical treatment. This is partially because medical research has revealed how potent its pain-relieving properties are, especially for treating chronic pain.

Dagga’s power as a pain reliever is due to chemical compounds it contains that relax the brain and inhibit pain receptors.

2. Dagga makes pain bearable rather than eliminating it

Cannabis doesn’t actually eliminate the source of pain, necessarily. Instead it makes ongoing pain more bearable. Researchers have found that the cannabinoids present in cannabis are absorbed in our blood vessels, from where they travel to the brain. Transporters take them to the target cells; there they bind with specific receptors resulting in pain relief.

Tissue damage can lead to sharp aching or throbbing pain. Damaged tissue leads to inflammation which is part of what makes some pain particularly uncomfortable. Pain is caused when receptors activated by proteins and chemicals released from affected cells travel to the spinal cord and up to the brain.

Cannabis targets those receptors and dampen their effects, muting their ability to translate inflammation into pain signals.

4. The pain-relieving effects of THC and cannabinoids are adjustable

The degree of pain communicated to the brain via the spinal cord can be adjusted by how much THC a person consumes. Some users micro-dose as only a very little amount of the herb is needed to have the desired effect.

5. Dagga for chronic pain relief has multiple other benefits

Clinical trials have shown that cancer patients given marijuana commonly experience less chronic pain as well as decreased nausea and vomiting. Dagga is also used to increase appetite in cancer patients. Taking THC orally (via smoking or cannabis oil) thus not only relieves pain but a variety of other undesirable symptoms, too.

Unfortunately, some people benefit less from the health benefits of medical marijuana than others. Not all patients respond well to the pain-reliving effects of marijuana. Some, in trials and studies, have developed skin irritation or rashes instead.

Both supplements provided similar relief, yet THC proved to be more calming. It is also thought to be less physically addictive.