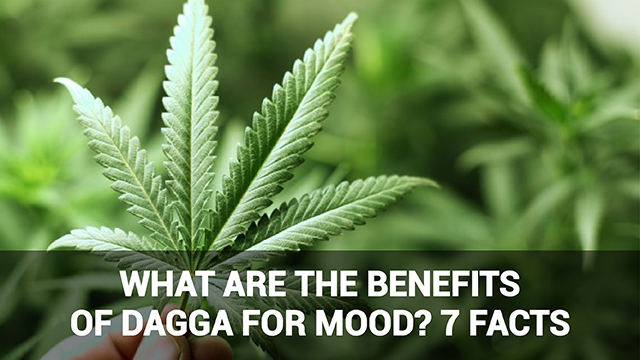 The benefits of dagga on mood have long been overlooked due to the stigma around using mood-altering substances. Recreational cannabis or marijuana use has several effects: Relaxation, increased mirth and social ease. Marijuana affects mood significantly because of the effects of dagga on brain activity. Some studies even suggest that cannabis is beneficial for severe conditions affecting the brain such as epilepsy. Here are several benefits dagga has on mood:

7 benefits of dagga on mood

Using weed recreationally is common practice around the world, yet there are many facts you may not know if you’ve never used dagga before:

The benefits of dagga on mood are well-document. Anandamide, also referred to as the ‘bliss molecule’, is produced by our body to bind to the cannabinoids that weed contains. Studies have found that this release causes, for example, sweet foods to seem even sweeter while not also stimulating the bitter sensation of bitter foods. The bliss molecule also is thought to relieve anxiety and depression.

Another well-known effect of dagga on mood is how it increases relaxation. Although dagga use may interfere with sleep patterns over time, many who use marijuana in moderation report that it helps them to sleep better, by reducing brain hyperactivity.

Always in an anxious mood? Cannabis is thought to reduce panic attack frequency and, when used moderately, is an effective anxiety-reducer.

PTSD or Post-Traumatic Stress Disorder is a common mental illness resulting from undergoing a shocking, terrifying or traumatic event. Sufferers such as war veterans are often haunted by flashbacks where they relive a traumatic experience in waking life or vivid nightmares. The cannabinoid called THC is the main psychoactive ingredient that many find eases the symptoms of PTSD and foster greater mental ease.

Although cannabis or dagga can trigger certain underlying mental conditions or mood disorders (such as Bipolar disorder), many other users experience more consistent mood due to frequent use.

One of the best-known benefits of dagga for mood is that it can produce a ‘high’ sensation. This is where the cannabinoids in cannabis stimulate the senses and affect perception of time and space. This effect means that many report feelings of greater awareness and creativity while under the effects of marijuana.

Physical pain is a major cause of emotional distress, especially in those who live with chronic pain and illness.

Medical marijuana has excellent natural pain-relieving properties. Because it is so effective in reducing pain, dagga benefits mood by reducing additional sources of emotional distress and mood variance.

The benefits of dagga for mood outlined are just some of the reasons why medical marijuana has been legalized increasingly all over the world.  As stigma shifts and more are discovered the health benefits of weed, the trend and tradition of using dagga to improve mood will likely increase.